Dudley Lee was a Hells Angels biker turned fake perfume hawker in South Africa. After some scuffles with the law for selling forged goods he ended in Pollsmoore prison, on the outskirts of Cape Town.

The front page story of this mornings Wall Street Journal described the harrowing experience of prisoners using tuberculosis a weapon:

Dudley Lee in a night raid, the peddler of fake perfume landed in Pollsmoor Prison, surrounded by inmates who threatened to kill him—with their coughing. But in the meantime, the prisoners around him coughed, sneezed, spit and sweated. In so doing, they infected Mr. Lee with tuberculosis, South Africa’s biggest single killer.

“These guys were coughing like dogs, practically sitting on top of me,” says Mr. Lee, 67 years old. “I was busy dying in there.”

Lee sued the South African government for letting him suffer in conditions that led to a tuberculosis infection that could have been prevented.

The article points out several challenges of of a system overcrowded with infected populations of dangerous diseases like TB. We have compiled a set of approaches to tackle these problems that take us to Cambridge, London, and Indiana (go Hoosiers!), more after the break.

Like others in the awaiting-trial section, he spent 23 hours a day locked in a cell with a dirty mattress. He inhaled the smoke of burning wads of twisted toilet paper, a tactic of gang members to mask the scent of marijuana.

Zapping TB in the air. Professor Ed Nardell and his team at the Harvard School of Public Health have been looking at this problem and are developing a series of architectural add-ons that beam UV lights and cross ventilation strategies to make sure that bacterium is inactivated in the air. Jacqueline Linnes, a former postdoc at Little Devices who worked on creating the next generation of UV TB light zappers and now at Boston University has explained that the methods are well understood, they TB bacterium is inactivated in the air by UV, and if the source is close enough, it happens almost instantly.

In March, Deputy President Kgalema Motlanthe visited Pollsmoor, calling prison facilities this year’s focal point for tuberculosis. He presided over the donation to prisons of new GeneXpert machines—devices that cut TB diagnosis times to less than two hours, instead of days or weeks.

GeneXpert is now one of the flagship technologies for detecting TB and resistance. What few people talk about is that each machine is the price of a Tesla Model S ($78,000) and each cartridge is that the technician on the video was barcode lasering is $72. Sure, some subsidies by the PEPFAR can bring that price down, but that’s not a sustainable strategy, especially for upstart private clinics. 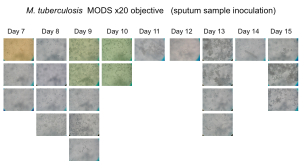 A more affordable alternative is being developed by Dr. David Moore at the London School of Tropical Health and Hygeine called MODS – Microscopic-observation drug-susceptibility assay for the diagnosis of TB. The assay can be done in most laboratories equipped with a small incubator and a microscope. Add image recognition and you have a very quick and dedicated approach to determining TB resistance in about 7 days.

Running out of Medication

Shortages of some TB medications are worsening drug resistance because patients sometimes run out of drugs, allowing the disease to mutate and become resistant. In the U.S., cases of MDR tuberculosis are still rare, but rose to 127 in 2011 from 109 the year before, according to the Centers for Disease Control and Prevention.

TB is a curable disease with medication that is mostly generic. So why are we running of meds when governments are spending Tesla prices on complex lab equipment? The answer seems to lie in very inefficient supply chains of medications and centralized regulatory control by international bodies. The Eli Lilly Foundation and others are coming with ways of addressing the problem in a multipronged approach:

Little Devices is working on this last issue and we’ll be showing some early results in the fall, stay tuned.